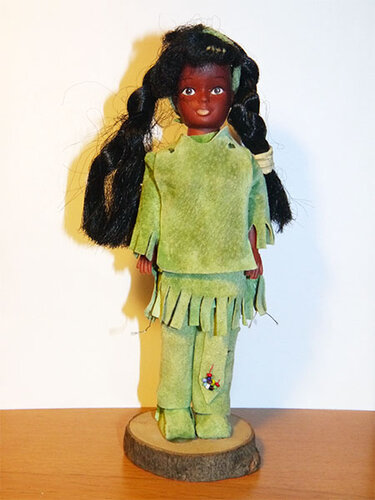 
In some cases the label, if it is an unusual or rare one, can add to the dolls value.

Because Skookum Indian dolls were made for such a long period of time there were years when two to three labels may have been in simultaneous use. This seems to be the case particularly in the late teens through the s. The table below illustrates the Skookum Indian doll labels we have found to date. Please note that the labels themselves were printed on a variety of colored papers including: The examples below are references for the design and content of the label only. You may have the same labels in different colors. A very rare label.

There are always exceptions with these individualistic, handmade dolls! The first apple headed Skookum dolls of the mid teens were dressed in thin flannel plaid blankets. Blouses and shirts utilized cotton solids as well as prints dating from the turn of the century into the teens.

Prints tended to be tiny geometric patterns or calico florals, most often in somewhat subdued tones. Solid red, gold, blue and other colors were used as well. Dyed cotton gauze was used for shirts and kerchiefs.


As the Skookum line of dolls began to include more styles and production was shifted to the Tammen Co. To satisfy the need for the blanket wraps, it is speculated that factory seconds of Beacon and Esmond blankets were bought in quantity. Mary McAboy was aware that Indians on the reservations wore similarly patterned wool trade blankets so it would seem a natural choice. The blankets had a thick flannel feel and the designs were well suited for the dolls.

The fabrics used in the shirts and skirts reflected the times as well. By the 30s prints became bolder and more vivid, even whimsical at times. Wool felt was used for the male's pants as well as for some of the larger female dolls fringed dresses and smaller doll's underskirts. The 30s saw little change until war time when materials were at a shortage.